It’s Tuesday and the sun has made its first appearance in several days. I’ve never thought of Italy as a wintry place, but it can be cold, damp and gray. Not today. By the time we pulled ourselves away from our cozy bed (after Barn made a heroic run to the bar around the corner and came back with two cappucinos and a chocolate brioche — did I say we were really roughing it here, and dieting too….) — 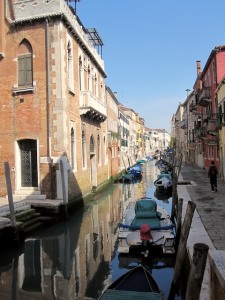 the sun was breaking through the clouds and the puddles were almost all dry. We wandered over to the neighborhoods San Polo and San Croce, to the Santa Maria Gloriosa dei Frari, or just plain Frari, one of the most magnificent churches in Venice. It was built in 1250 but replaced by a larger building in the 15th century. There are several Titian masterpieces inside and a Bellini or two as well. It was still cool inside — we could see our breath — but so worth the walk over.

After stopping for sandwiches, more coffee, beers, more sandwiches, ice cream, another chocolate croissant, and some mineral waters, we wandered (waddled) over to a beautiful palazzo that has been turned into a modern art museum. Kind of like the Peggy Guggenheim museum we visited yesterday, but this one had a lot more money but not Peggy’s taste. The building was glorious but the collection a little lacking. They have one nice Pierre Bonnard, a very good Gustav Klimt, a Klee, Miro and one or two Kandinskys. The same family that built the palazzo had a magnificent alter at the Frari — and Titian painted their altar piece. It’s such a small world. 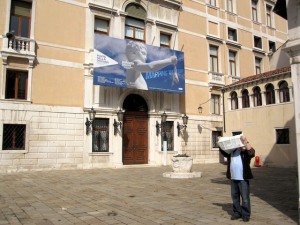 We found the gallery where Nate Lowman’s painting is hanging but they were closed today. (This is a photo of it.) We’ll go back tomorrow. It’s fun to see modern art in this ancient place. Barnaby is so good with the map — I couldn’t resist taking this picture. We try but we can’t manage to get lost. Our map is so detailed that 14 inches on the map equals about a mile. Barn keeps reminding of that when I whine about my feet hurting. Not that there’s any other way to get around this place other than on foot! 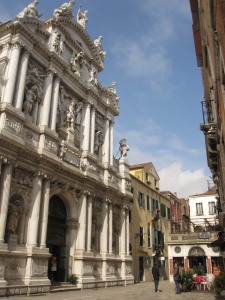 The bells are ringing again — it’s 10 o’clock and I’m about to turn into a pumpkin so I better sign off for now. My expensive internet is about to end…

Anne Finch lives in Idyllwild, California. She and her husband Barnaby love to travel. They also love their hometown. END_OF_DOCUMENT_TOKEN_TO_BE_REPLACED
This entry was posted on Tuesday, March 23rd, 2010 at 8:10 pm and posted in Uncategorized. You can follow any responses to this entry through the RSS 2.0 feed.
« Venice — March 22, 2010
A couple of Barnaby’s photos from Italy »