Just about to say goodnight to our first full day in Russia — it’s after midnight and since I’ve been awake since 4 am and on the go since 7 I’ll make this brief.

After our 1986 trip to the USSR — Moscow, Samarkand and Tashkent, I swore I would never come back — but I’m glad I changed my mind and agreed to visit St. Petersberg. So much has happened here in 24 years and it is a lovely city.

The weather was dry and warm but overcast — poor for photography. My iPhone makes the best of poor conditions. This is Peterhof Palace, about an hour outside of the city, Peter The Great’s country home built in 1704. Peter was fond of fountains — there are over 100. Peter built St. Petersberg (its third name — first St. Petersberg, but then changed to Petrograd after WWI since Peter is a German name and Russians aren’t fond of Germans, then to Leningrad, even though Lenin wasn’t from here, then back to St. Petersberg), so he would have an outpost on the Baltic, it sits on the Bay of Finland. Helsinki is only 300 km away. It was swampland that they filled in and created canals, it’s a lot like Venice only much larger. In fact, it’s the only city over one million (nearly five million actually) above 60 degrees north.

After a delicious lunch and extensive tour of Peterhof, we had a tour of St. Petersberg and a visit to the old fortress and the Peter and Paul Chapel. All the important Czars are buried there — including some very interesting women, among them Catherine The Great. She was married to Peter the Third, Peter The Great’s grandson, but her “Favorite” — Lord Orlov, took care of Peter (he preferred playing with his toy soldiers to matters of state) and Catherine ascended to the throne and ruled for 34 years. She built Orlov a gorgeous palace as a little thank you gift. Catherine liked to wear pants — there was a great portrait of her on horseback — astride of course. 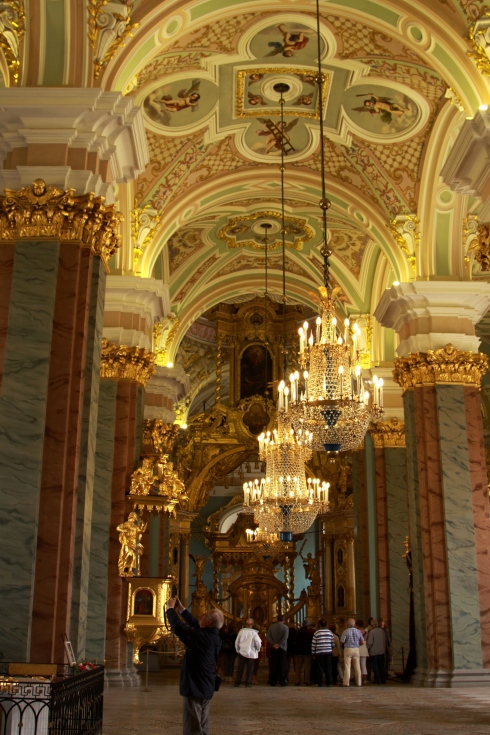 We walked back to our hotel after dinner — the streets are teeming with people shopping and out for dinner, nothing like Moscow of 1986.

Click on the photos to see them full size. Promise I’ll write more soon — there is so much to share.

Anne Finch lives in Idyllwild, California. She and her husband Barnaby love to travel. They also love their hometown. END_OF_DOCUMENT_TOKEN_TO_BE_REPLACED
This entry was posted on Wednesday, September 8th, 2010 at 7:55 pm and posted in Uncategorized. You can follow any responses to this entry through the RSS 2.0 feed.
« From the archives: Greetings from the Falklands
Aland, September 12, 2010 »