Greetings from Cairo! We’ve just arrived back from our trip to Upper Egypt, that’s down south for those of you that didn’t know the Nile flows from the south to the north. I have learned more about Egypt in the past couple of weeks then you’ll ever want to know. Upper and lower Egypt were united around 3,000 BC, they broke up a few times, but the unification was a big deal and always memorialized in their art. Everywhere there are alternating lotus flowers and the papyrus, a design so lovely that it has been borrowed by many modern designers (it all looks very familiar).  Luxor, or in ancient times Thebes, was the capital of ancient Egypt and has the most temples, shrines and tombs. The pharaohs were obsessed with death, or rather their afterlife, so they spent their entire life planning for it. They also spent a good bit of time fighting wars and having children like the 105 Ramses II fathered (he lived a very long life — 93 years). You probably know the pyramids were tombs, but they were so big they were easy targets for thieves. The tombs we visited yesterday in the Valley of the Kings, were hidden, some — like King Tut’s — was hidden for centuries. Tut’s was also one of the smallest found — he lived such a short life that when he died his priests had to get his tomb ready in a big hurry, the paint didn’t even have time to dry!

We’ve had an incredible, if at times exhausting, time. Not only have we seen temples and museums, but we’ve also visited some local’s homes, a school and a women’s sewing workshop. We had tea with a Nubian family and spent another morning with a family that farms on the West bank of the Nile. In ancient times only the tombs were on the west side — you know — the sun sets in the west so that’s where you spend eternity. About 40 years ago the government offered small plots of land to people there for farming. Now they’re regretting it because the land is so full of ruins they’re afraid they won’t be found with people living on them. But the desert has already consumed many temples — who knows what’s really out there.

This is Barnaby leaning up against a statue of Horus, son of Isis and Osiris, a favorite god — his eye, which was lost in a battle, is good luck (I didn’t make this up!).

We spent a morning wandering through a small village as they were going to work — just waking up. This man has an ironing shop. He fills his mouth with water and sprays the fabric with a fine stream for steaming. It was hilarious and very effective.

This is the Temple of Hatshepsut. She was the only woman to rule Ancient Egypt. Hatshepsut was a very good king — she kept her people out of war and broadened their trade with neighboring countries. Her temple is very different from all the others we saw — the architecture was very modern looking even though it was built around 1,800 BC. She had an affair with her architect but couldn’t marry him because he wasn’t royally born. Hatshepsut frequently dressed like a man — she had to work very hard to convince the people she could rule. She ruled for 20 years.

The gentleman seated on Ramses III throne was our impromptu guide yesterday afternoon. He was hilarious. He pointed out all of the carvings of penises, something our lovely guide Caroline generally does not do. Apparently the kings wanted their men to bring back proof of the number of enemies killed so they would bring a hand, but some cheated and would bring both hands from the same man and claim they had killed two. The king stopped that by ordering them to bring back the penis instead. Yikes — those were tough times. 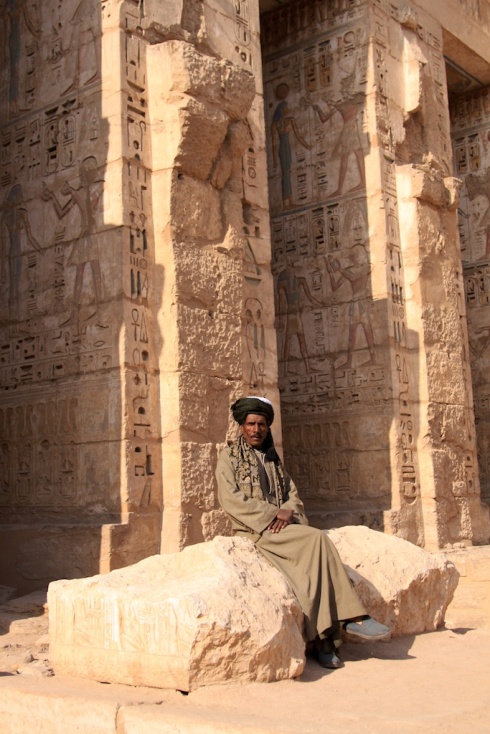 We’re spending several days here in Cairo then on to Alexandria. I’ve already taken about 2,500 photos — get ready for the big slide show. Our weather has been spectacular — cool mornings, warm days, cool evenings — just like home in the springtime. You all would be very happy having a beach vacation here. Caroline tells me there are private “ladies” beaches in Alexandria so all the veiled Muslim women can wear a bathing suit and relax. The men here are very aggressive. If I wonder off alone at all I get hit on. Yesterday I almost jumped out of a moving tram to get away from a creep. The old man I photographed yesterday at the temple knew I was with my husband so he asked if I had any sisters. You’d think they never see plump blonds!

Anne Finch lives in Idyllwild, California. She and her husband Barnaby love to travel. They also love their hometown. END_OF_DOCUMENT_TOKEN_TO_BE_REPLACED
This entry was posted on Friday, January 21st, 2011 at 3:04 pm and posted in Uncategorized. You can follow any responses to this entry through the RSS 2.0 feed.
« Jaresh & Petra, Jordan then on to Egypt
Early morning at the Great Pyramid »