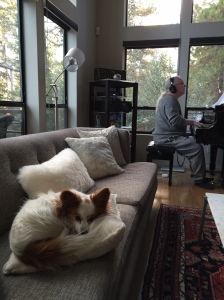 Abby and Barnaby in Idyllwild

Greetings from Idyllwild. It’s been a very long time since I’ve posted anything to this blog, but since we’re heading out on a crazy long trip next week, I thought I would start it up again. The past year or two hasn’t been wasted. We’ve bought and sold houses, moved a couple of times, had great fun traveling and playing music, but sadly, we also lost both of our moms. I’m finally seeing my mom in my mind, as the beautiful woman she was, not the sad creature that lay dying. I’m happy to have been able to spend a lot of time with her in those last days, but I don’t want to remember her like that. At the end, it took so much to get her to even smile (like a loud rendition of Folsom Prison Blues). She had always had a wonderful sense of humor and laughed all the time, but she lost almost all of her hearing and finally, her will to even listen.

Barnaby’s sweet mom passed a year later, much more suddenly, and having never, thankfully, gone through that wasting away stage. We miss them both so much.

We are thrilled Idyllwild Arts new concert hall has been completed. We attended the first performance, a “soft” opening, it was a wonderful concert. Alumni and students performed a variety of originals and standards in honor of Marshall Hawkins, their beloved teacher. 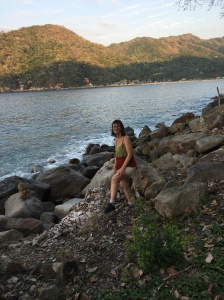 My sister Ren spent some time in Mexico earlier this month at a yoga retreat. She loved it. Later this year we’re going to do a sisters trip to a spa in Mexico just outside of Mexico City. It won’t be as rustic as her yoga retreat (it includes a massage every day!).

I have to add a recent photo of my sister Lorna. She’s still very happy to be living in Carson City, Nevada. Her daughter Amy is close by, and all of her old friends. Yeah, we spend too much time shopping, but we can’t help it — it’s in the DNA! 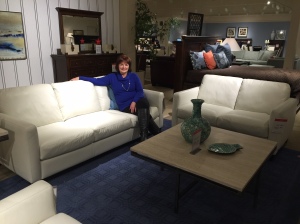 I’ll sign off for now. This time next week Buenos Aires and then we head south to Ushuaia, my favorite place to board a ship!

Anne Finch lives in Idyllwild, California. She and her husband Barnaby love to travel. They also love their hometown. END_OF_DOCUMENT_TOKEN_TO_BE_REPLACED
This entry was posted on Monday, March 14th, 2016 at 5:39 pm and posted in Uncategorized. You can follow any responses to this entry through the RSS 2.0 feed.
« Cape Town
Abby turns 10 »